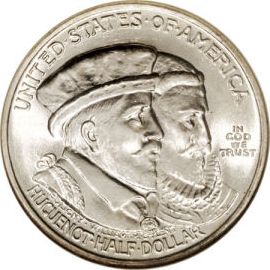 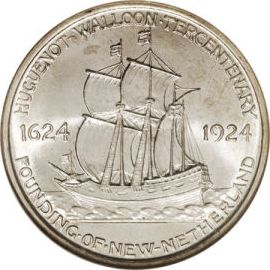 The 1924 Huguenot Walloon Half Dollar was created to commemorate the 300th anniversary of the colonization of New Netherland in 1624. This area is very broadly defined as being between present day Canada and Virginia.

This coin was disliked for many different reasons. First, it was criticized as being religious propaganda due to the French Protestants being persecuted in Holland and Catholic France. Secondly, by individuals fighting for the First Amendment of the Constitution that separates church and state. Also, for years it was shunned by numismatists as being something less than aesthetically pleasing, and thought to be a mediocre design. Personally, I agree with regard to the obverse. However, it is my opinion that the ship on the reverse is a very good design, showing great detail in the sails, flags, and down to the ship’s hull.

The obverse of this coin is rather odd as it has a conjoined bust of Admiral Gaspard de Coligny and William the Silent. Both men had passed long before, and played no part in the settlement of the Americas. The inscriptions on the front of the coin read "UNITED STATES OF AMERICA" on the upper edge, and "IN GOD WE TRUST" in the right field of the coin. Also, below the image reads "COLIGNY - WILLIAM THE SILENT" and "HUGUENOT-HALF DOLLAR".

The reverse of the coin shows an image of the Nieuw Nederland (Dutch for New Netherland). This was the ship that carrier 30 families to North America in 1624. The ship sailed from the Netherlands to Fort Orange, near present day Albany, New York. The trip took about two months and was completed around June 1, 1624. The inscriptions on the reverse of the coin read "HUGUENOT-WALLOON TERCENTENARY" across the top. The dates "1624-1924" appear on either side of the ship, and “FOUNDING OF NEW NETHERLAND” along the bottom.

In grading this coin, the areas that will show wear first include Coligny’s cheekbone on the obverse and the lower part of the highest sail as well as the stern of the ship on the reverse.