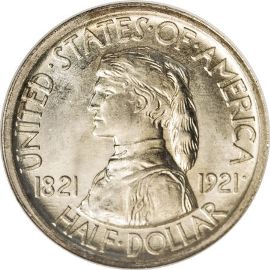 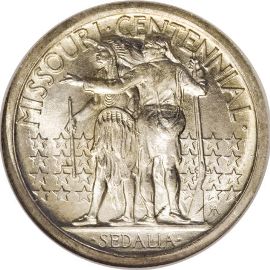 The 1921 Missouri Centennial Half Dollar was produced to commemorate the 100th anniversary of Missouri entering into the union in 1821. The coin was designed by Robert Aitken, who is best known for designing the Panama Pacific Exposition fifty dollar gold commemoratives. Later in 1935 he also designed the San-Diego California Pacific Exposition half dollar.

This point in American history was very difficult, due to the delicate balance of power in Congress between free and slave states. However, after much debate, the Missouri Compromise paved the way for this state to enter the union as a slave-holding state, but only in exchange for Maine entering as a free state.

The obverse of the coin shows an image of Daniel Boone. He is wearing a buckskin shirt and a coonskin cap. The inscriptions around the rim read “UNITED STATES OF AMERICA” and “HALF DOLLAR”. Also, the coins are dual dated “1821 – 1921”. The dates are located on both sides of Boone. A limited number of coins struck include “2★4” above 1821. The symbol is supposed to indicate Missouri as the 24th state to enter the union. This was included for no other reason than to heighten collector interest, sell more coins at the time, and create more revenue.

The reverse of the coin also shows a standing image of Boone with a Native American. Boone is holding a rifle with a powder horn hanging from his belt. Boone’s left arm is outstretched to the west, and symbolizes the westward expansion. The coin also shows the Native American tribes willingness to assist the pioneers in exploring the west. The inscriptions around the edge of the reverse read “MISSOURI CENTENNIAL” and the city name “SEDALIA”. At that time Sedalia was the capital of Missouri, and the city where the centennial celebrations were held. The design on the reverse also includes 24 stars, again an indication of Missouri being the 24th state.