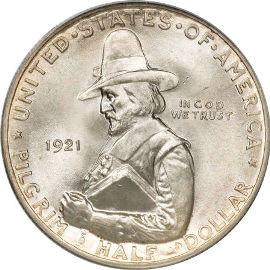 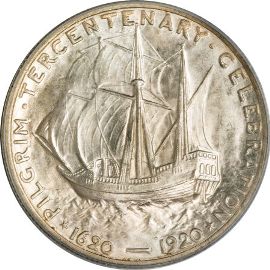 The Pilgrim Tercentenary Half Dollar was produced to commemorate the 300th anniversary of the Mayflower landing on Plymouth Rock in 1620.  The final destination is now known as Plymouth Harbor in Massachusetts. These silver coins were struck in both 1920 and 1921 although the 1921 issue was not very well received due to the 301 year date discrepancy. Today, the 1921 dated coins are sought after by collectors as rarities.

When most people think of Pilgrim’s it is natural to automatically think of the first Thanksgiving. However, it would be wrong to assume that the holiday has been an annual celebration since 1621. George Washington marked the first nation-wide thanksgiving celebration in the United States as November 26, 1789.

The obverse of the coin was designed by Cyrus E Dallin and features an image of William Bradford with a Bible or some sort of book. Bradford was elected Governor of the Plymouth colony for fifteen consecutive two-year terms. Unfortunately, no portraits of Bradford exist, so what he actually looked like is up for interpretation. The inscriptions around the front edge read “UNITED STATES OF AMERICA”, “PILGRIM” and “HALF DOLLAR”.  To the right of Bradford is inscribed “IN GOD WE TRUST” and on 1920 dated coins, nothing appears to the left. The date was added to the left on the coins produced in 1921.

On the reverse of this coin is a depiction of the Mayflower, also designed by Dallin. The Mayflower was a carrack, and had three masts. Not much is known about the Mayflower other than the ship returned to England about one year later and was later scrapped due to extensive damage caused by the long journey. The Mayflower was very similar to the Santa Maria that carried Christopher Columbus to the new world in 1492. The inscription on the reverse edge read “PILGRIM TERCENTENARY CELEBRATION” and the date “1620 - 1920”.