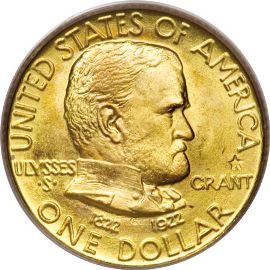 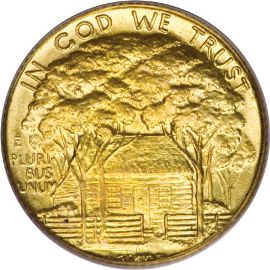 The 1922 Ulysses S Grant Centennial Gold Dollar was created to commemorate the 100th anniversary of Grant’s birth. Grant was born in Point Pleasant Ohio in 1822. His life was rather uneventful till the age of 23 when he graduated the U.S. Military Academy at West Point on March 20, 1846. For the next eight years he served in the Army and fought in the Mexican American War with very little commendation. He then resigned from the Army in 1854.

At the beginning of the Civil War, Grant offered his services to the Union army. Little did he know, at the time, he would defeat the Confederacy and end the war. He was appointed a brigadier general and had his first major victory at Fort Donelson, Tennessee. From there, he went on to win battles at Shiloh and Vicksburg. In 1864 he was given the title of lieutenant general by President Lincoln. Grant finally defeated General Robert E. Lee and his Confederate army on April 9, 1865 at Appomattox Court House, Virginia. This effectively ended the war but ironically, five days later on April 14, 1865 President Lincoln was shot by John Wilkes Booth and died the next day.

This coin is identical in design as its half dollar counterpart. The obverse of the coin shows a right facing portrait of Grant. The image was taken from a photograph by Matthew Brady. The inscriptions around the coin read “UNITED STATES OF AMERICA” and “HALF DOLLAR” while “ULYSSES S GRANT” is positioned on both sides of the portrait. The coin is dual dated “1822-1922” to indicate the centennial the coin celebrates.

The reverse of the coin shows the house where Grant was born in Point Pleasant Ohio. The house is fenced in, and is surrounded by a canopy of trees. The inscriptions on the reverse read “IN GOD WE TRUST” and “E PLURIBUS UNUM”.

As with most of the obsolete commemorative coins, this gold dollar was struck with two varieties. One has a star above “GRANT” on the obverse, and one without the star. This is done mainly to increase collector interest, but at the time, collectors resented having two varieties of the same coin. Even with that being the case, the coins were still sold out of the total mintage of 10,000 coins. Today, both coins are highly sought after.